Saint-Domingue, today Haiti, was once the wealthiest in the Caribbean. In 1789, with about 528,000 African laborer, with 30,000 European rulers. And in 1791 the 13-year-long Haitian Revolution began. Haiti, is by far, the country that has been worst punished and most hated for forcing Europe and America to put a punctuation in their concept of superiority. Not only did the Haitians defeated the European folk hero, Napoleon, they held America, British, France, and Spain armies at bay for one hundred years (100 years); with all their power and superiority, the Europeans and Americans could not broken down the Haitian defense.

Haiti injury the European pride was of no small measure

In 1791, the African population, led by Toussaint L’Ouverture, Jean Jacques Dessalines, and Henri Christophe, revolted and gained control of the northern part of Saint-Domingue. They defeated the British expeditionary force in 1798, and even led an invasion of neighboring Santo Domingo, freeing other Africans there. In this same year, Toussaint issued a constitution for Saint-Domingue which provided for autonomy and made Toussaint himself governor. Napoleon Bonaparte dispatched an expedition of French elite soldiers to the island, led by Bonaparte’s brother in law, Charles Leclerc, to restore French rule. After being deceived by false guarantees, Toussaint was seized and shipped off to France where he died two years later while imprisoned at Fort-de-Joux. For a few months the island was quiescent under Napoleonic rule, but in October of 1802, the Haitian generals re-surged under the leadership of Jean-Jacques Dessalines who led the battle from that point until its completion when the French forces were finally soundly defeated and the area was rename HAITI. This was the Haiti Revolution. On January 1, 1804, Dessalines declared Haiti a free republic and joined the United States as the second independent nation in the Western Hemisphere. With its independence, Haiti became the first black republic and the second-oldest republic after the United States in the Western Hemisphere. In fact, there exists, outside Haiti, no other case, in the history of this world, of an enslaved people breaking their own chains and using military might to defeat the powerful rulers and then force them into exile. In the 1790s, the Africans erupt in the whole country, like a boiling vulcano that had, for long, stood an unbearable pain. No partial reform could quell the battle led by Touissant L’Overture and Jean Jacques Dessalines, not even the formal abolition of slavery in 1794. The Africans wanted their so called masters out of the island for good, and fought hard was the US, French, Spanish, and British armies that came to support the French settlers. And in 1804 they drove them out, and painfully giving birth to the first black republic in the west. All of the world was shocked and horrified: it was a “dreadful” example for slaves everywhere. No country gave Haiti formal recognition until much later. The USA wouldn’t recognize, under the excuse that black ambassadors would be a bad example for the local slaves, and France only recognized it in 1825, after Haiti, strangled by an economic blockade, had to accept paying for the estimation France had made of their “losses” with Haiti’s independence. The estimate was made by a calculating how much the French had stopped profiting, and for the “price” of all the slaves that had been freed, civilized manners demanded payment for the loss of “property”. The debt Haiti had to pay was originally 150 millions francs, 44 times the national budget of Haiti at the time. They got into a debt that would for 100 years with French bankers, by the end of the century, this debt absorbed 80% of the national income. It is in this that we find the main reason of Haiti’s appalling poverty Haiti injury the European pride was of no small measure. Look at Haiti in the Battle of 1803, the final defeat of Napoleon Bonaparte elite army. Haiti did what England and Russia could not do, defeat of Napoleon Bonaparte. After the battle, Haiti set up courts, and then executed prisoner. Such was not heard of. Black government executing white prisoners. England, France, Spain, and America, in compact, went to restore Europe pride but also fell at the feet of the Haitian defense. The invaders devised an economic strategy in the battle -economic strangulation. In an economic blockade, they wrapped themselves around Haiti like a serpent in preparation for an American invasion, which took 100 years to execute. Haiti fell in the hands of the Americans in 1915 and was then occupied until 1934. It was a discovery for both America and Europe that economics could be a weapon. Since minds cannot spring board from poverty, the American invasion set the stage for what you see today, the perpetual poverty of a people. Haiti was forced to pay France 80 cents($0.80US) of every dollar for one hundred years, debt valued at $35billion Euros today. In 1947, Haiti finally paid off the original reparations, plus interest. Doing so left it destitute, disastrously lacking in investment and politically volatile. Haiti was trapped in a downward spiral, from which it is still impossible to escape. It remains hopelessly in debt to this day. In the shade of this debt and the restrictions on trade, the intervention of the USA left a painful legacy of economic and political interventionism. The intervention, had, as a main goal, to reform the land laws of Haiti, allowing the appropriation of land by foreign investors, taking away (most of the times with the help of the marines) the land from the poor peasants, and giving it to the plantations of private US companies. For this purpose, USA drafted a Constitution that was approved by less than 5% of the population (the marines dissolved the National Assembly – Parliament – in 1917, after they didn’t ratify it), that protected above the rights of the local, the right of private and foreign investors in regard to the resources and wealth of the country, it allowed, for instance, the full repatriation of profits. They introduced forced labour in the platations, that is what sparked the Cacos rebellion. They formed the Haitian military forces, notorious for their brutality, whose sole victory has been against Haitian people themselves. The army has been one of the pillars of political domination by the Haitian elites, and for their allies in Washington. The Americans in the country until 1934, but when they left, they made sure that their friends remained holding really tightly the strings of power.

To US and France Haiti was dead

All was well with Haiti in the eyes of America and France until Jean-Bertrand Aristide was elected as presidential. Canada was not a part of the pack until the 1990’s. Jean-Bertrand Aristide began to cultivate the Haitian mind by awakening their remembrance of the former time and glory by saying that France should repay the $25b euros to Haiti. This statement caused America and France to notice that Haiti is not dead, and the course was now set to discredit and remove Jean-Bertrand Aristide from office. The players, the European pack, were the UN, Canada, US, and France, while the Pope was elected to be silent. The international press echoed fake concerns on the Human Rights records of Aristide, the French press, the one that went furthest, denounced the “carnival of death and torture,” When there was none. Haiti was strangled by an oppressive economic situation, and claiming electoral scandals, the USA managed to block all sort of economic support to Haiti. France hardened its hand over Haiti as well, after Aristide was bold enough to point out the wickedness of France and the robbers of the Haitian people, that France should pay back the money Haiti paid them as a price for their independence. But the gang there to defended the European pride was too much for Haitian. Haiti was alone. So in the final scene, when all the actors had played their parts, just after the 200th anniversary of their independence, an American war plane came down from the sky, just before dawn, and kidnapped Jean-Bertrand Aristide, the elected president into exile.

And the European pride was restored. Yet Haitian are still standing. So don’t dance, Haiti is not dead yet. You may even dig the hole and build the coffin, just to your surprise Haiti is not dead 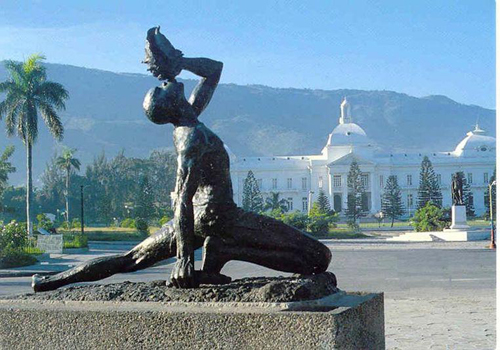